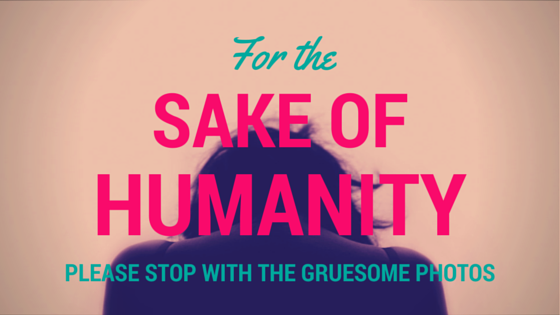 PLEASE STOP WITH THE GRUESOME PHOTOS

Lately, it seems like there has been a rise of violent crimes happening throughout the world.  Extremist terrorist groups are making their names known by the slaughter of innocent people.  People are killing for what they believe in while others are dying for what they don’t believe in.  It’s disgusting.

While I’ve been crying for humanity and devastated at the very thought of the gruesome experience theseinnocent victims have endured—others on Facebook have been trying their hand at social media marketing and sharing disturbing images from the ground.  My timeline has been sprinkled with images of bloodied decapitated cadavers.  Some people have left comments expressing their concerns—I simply unfollow them.  What i want to know is what makes these people think assualting our senses with horrible photographs will make us more compassionate for the cause? What makes them post without thinking that sharing this image is in bad taste?

I personally feel that if you are a showing images of people who have been brutally murdered or maimed without permission of their family—you are inconsiderate.  You are exploiting these people only to push your own personal agenda—its not okay.  It wasn’t okay to do it with Saddam Hussein or underprivledged children.

You are neglecting the concerns of your friends who don’t care the see the images.  Yes a picture is worth a thousand words.  But have more faith in your friends.  We don’t need to see an image to have compassion.  Most people are horrified by the thought of such barbarity.  Even in a time when the world seems to have gone to savages— there is still some humanity.

P.S. If you are going to blame an entire religion for one sect’s actions—you better take a deep look into your own religion to see what crimes you are responsible.  Christ said “He who is without sin, cast the first stone.”

I’m excited to share one of the many things I’ve been working on for this site—Sweet Tea and Sass Live.  Okay, I’m not sure if that’s what I’m calling it but its in the running.  I will posting two videos a month — just learned that it could be biweekly or bimonthly (mind blown)!  Below I have posted a trailer for a quick peek at what’s coming up on Sweet Tea and Sass.

The polls are open, what am I naming my video post? Give me something great that we can write an intro song to!

This past week my mother came to visit us (I have a brother and sister that lives in Cali as well) but I like to think that she came to visit me! If you don’t know, I LOVE MY MOTHER! Steph and I have a bond. One where I can call her Steph just as long as I am not seriously thinking that I am getting away with calling her by her first name. It absolutely drives my friends crazy. They’re so jelly.

I also talk to my mom like 8 times a day.  Not because we have an obsessive relationship but because our convos are usually cut short because we got to go into a meeting or something. Sometimes we just share a thought and hang up. I would text her but her phone is like the world’s first palm pilot or something and she doesn’t always get my messages.  My sibs totally pick on me about how often I talk to my mom.

Mom and I have an understanding. I teach her how to use Facebook and she helps me make sound financial decisions.  I would never call my mother my friend because of the phrase every kid heard growing up “I’m not your friend, I’m your mother”. But we are kinda like friends.  But she will still lecture me and give me unsolicited advice–because as she puts it, “I may not be a manager any more but I am still in consultant position for the rest of your life.” I realized on this last minute there are stages I go through during these visits. The week before I was kind of obsessed with making sure everything was clean and in place. Not because I’m junky but because mom is like super clean and has a way of finding dirt that does not exist.

But then the day of, I came to the realization that no matter how hard I tried, mom was just going to end up cleaning anyway.  All while making it looking so effortless.

When mom gets here. I like to pretend that I am grown.  I like to show that all of the hard work and investment has paid off.  I am doing well.  I can cook, clean, decorate, pay bills on time, have fun and have some sort of balance.  This act of showing off or pretending, only last for a few days.  If your parents are staying more than a few days it will be hard to convincingly keep this cover.

Then there’s the moment when mom does a really mom thing and it tugs at that part of me thats sometimes wishes I could be a kid again. This time it was “Let’s go get groceries, I’ll pay.”  OH-EM-GEE!!! Be still my heart! I totally wish I could hop into the shopping cart and pull things off the shelf and put into the buggy–my own version of a real life Throw Back Thursday.

Sometimes we all need a chance to relive and appreciate things from our childhood that we took for granted. I’m not even ashamed to say that the grocery store trip was not that moment for me.  It was the moment when I had a mini breakdown-tears and all- and mom was there with open arms.

Hugs, encouraging words and great advice.  My mom has a way of making everything better.

When mom left, my house was cleaner, my fridge was full and my self esteem was intact.  I needed this time with my mom.  Parents are great—mine are the best! I am eternally grateful for the blessing that is mom and dad.

It pains me to write this, it really really does.  I first came upon this article about 3 days ago and immediately started to write my thoughts but then quickly deleted them.  If you have not clicked on the link, click here now!  For the few of you who just refuse to read, this article is about a pastor in west Africa who attempted to re-enact the Walking on Water miracle. Yeah that one where Jesus walks on water and then Peter steps out on his faith to do the same thing.  This pastor decided that he too was Peter and that he could walk on water. He drowns then dies.

SO MANY THOUGHTS! My head is spinning!

Where to begin?  There are so many reasons that this is a bad idea but mainly the following:

1) In the Bible when Peter walked on water (in the live physical presence of Jesus Christ), he started to doubt and begins to sink.  That right there tells me that even with Jesus standing with you in the present it is difficult to maintain enough faith to walk on water, why sir would you then try to recreate it?  Seriously, why?

2) Was this pastor in his right mind? Like anyone could say that this man was stepping out of faith but who is to say he wasn’t stepping out on drugs?  People on acid think they can fly…those people too have dropped to their untimely deaths.

If you read further down, in the aforementioned link, you will read about another pastor in Africa who was convinced that if he stood in a den of lions, God would protect him the same way that He protected Daniel.  So this pastor goes to a zoo and despite all warning sneaks into the lion’s den and gets mauled to death.

I seriously cannot handle this amount of foolishness.  There is only so much a girl can take. Now does this mean that I don’t believe in miracles? Of course not!  Mariah and Whitney said it best “There can be miracles when you believe!”  And yes, I believe!

However, I don’t think that God is a genie that just fulfills our wishes whenever we demand. Our wish is not His command…doesn’t work like that.

See this is why I didn’t want to write about this…I gotta get to the pulpit right quick.  Why in the world would anyone put them self in a position that even Jesus refused to put himself in.  Satan tried to tempt Jesus. Satan was basically like “hey you can do anything, God will do anything for you.  You can jump off of this cliff and legions of angels will come and rescue you.”  Jesus was like: “Nah, I’m good. I’m not testing God like that.  It says not to in the scripture.”  Of course I am paraphrasing but it’s in plain King James English in Matthew 4:1-11.

But I mean even if you could test God, wouldn’t you ask him to do a new thing.  Like we’ve seen the splitting of the red sea, water into wine and raising the dead.  But what about something creative like making a dollar out of 15 cents or turning my Amex card into a Black Card.  Requesting old miracles is similar to liking a old facebook photo from 2010. 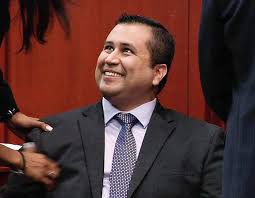 #ToastTip- If you don’t want to be seen as a bad guy then don’t KILL people.

Regardless of how you feel about the Zimmerman verdict, we all agree that he looks like a smug douche.  And whether or not you agree if he was right or wrong, we all agree he should have sat his cop-wanna-be-helpful self in his car.  Now that he is a free man and thousands of his fellow Americans are protesting his right to freedom, he feels that he needs a good image overhaul.

George pulls the family out of the burning car and saves their life. It’s terrific! This guy has a track record of being a real life hero…he’s like Superman without the tights, the vest, the supervision, the good hair, etc.  What are the odds of this happening right after the verdict? This guy is great! I love this…

What? What is that? This is all made up? You had nothing to do with the rescue?  Wow Georgie boy…you really are just a douche and everyone still hates you.

Now please go and take a long seat down.

What do you think? Staged or not staged? Douche or not douche? Please share your thoughts.