A few years ago, my sister asked me if I could explain to her white college roommate why publications such as Essence Magazine existed. In my head I immediately relived the nightmarish moment of trying to apply eye make up for “olive toned complexions” according to Seventeen Magazine.  The olive tone was the darkest skin complexion they had in the magazine, just like wavy/curly hair was the closest they would offer for tutorials on styling my kinky coils. Those styling tips don’t work!

Unless you are a person of color—you will never live these experiences.  So I tried to explain to my sister’s roommate what it was like living as an African American.

I explained to her that for many years, people who looked like me were not frequently seen in magazines or television.  Every image of a beautiful woman, was a white woman. Every image of a successful person was a white person.  The few times we saw ourselves was generally in some subservient role, because that is how the world saw us.

So instead of simply accepting the lack of images of ourselves, trailblazers created a platform for people with skin like mine and hair like mine—and no this separation wasn’t created by black people. It was a response to the separation that already existed. So while some may feel that the proper response to BET would be WET—we have to remember that for so long, all of television was White Entertainment Television.  The psychological impact is the thing that makes award shows like “Black Girls Rock” so necessary.

The issue is not that white people were on screen but that people of color were absent on the screen. Again, if you are not a person of color, you will not experience the same reality so these truths may be easily overlooked at no fault of your own.

In the wake of a rising awareness of black men being killed by cops, #BlackLivesMatter started trending and some people’s panties gathered in a bunch.  These folks countered with #WhiteLivesMatter in protest to the worthy cause.  The truth is that no one was questioning if white lives matter.  Statistics have shown that white men are less likely to be shot by cops than black men—so while it is ridiculous to think that innocent people of any race are being killed, we have to ask ourselves why a group that is overwhelming less populous than white men is being killed at higher rates.  Maybe a hashtag and strong statement will remind those who are meant to serve and protect that in addition to other lives black lives matter too.

It hard for many millennials to imagine that in our not so distant past our country found itself trying to undo racist laws that had been set in place since the very inception of our country and the truth is—we are still trying to figure this ish out.

We try to keep the dark past of slavery hidden because that mess is jacked up, demoralizing and embarrassing for everyone involved. It reflects the school of thought that many of our forefathers possessed.  The laws and rules set in motion would impact generations to come—not just systematically but also economically and psychologically.  It would be easier and less painful if we could just do a collective wipe of our memories.

So here we are—one generation removed—having to deal with the aftermath of a legally racist society.  One way we do it is by affirming ourselves while reminding others of our worth. It is not intended to take away from the beauty of all of humanity but to remind others that black is part of humanity as well.  It’s not going to be perfect right away and no one has all the answers.  Our country’s wounds are too deep and too fresh to just place a band aid—now is the time to do the work, have the conversation so that one day we can truly have a post racial society. 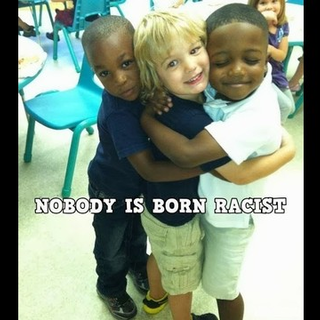