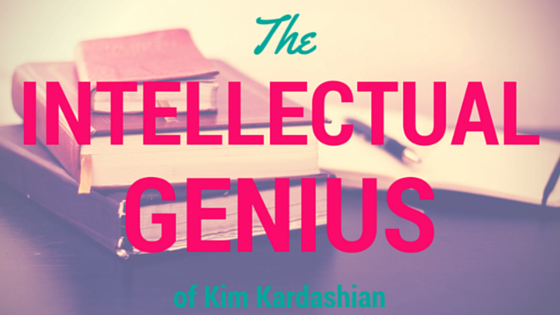 Nearly 10 years ago, Kim Kardashian became a household name and would help change the landscape of entertainment.  Kimberly grew to be famous not for her intellect, business acumen or great sense of humor.  No—she became famous because she slept with Brandy’s brother and video taped it.  Ever since then the world—for whatever reason–has grown deeply obsessed with Kimberly, her love life and her family.

While I’m not one of the millions that has watched her shows, I was amused at her recent ability to #BreaktheIntenet but showing us the naked display of her backside. It was here where I developed a theory about Ms. Kardashian West.  She is obviously an attractive woman (if pretty face, skinny waist and a butt for days –natural or otherwise– is your thing), with strong business know how, and deep family values.  But the only way she can get our attention is by sharing her self- mostly nude- with us?  That doesn’t seem right.

That thought right there made me go hmmm? What if Kimberly Kardashian West is more than what meets our eye?  What if she is currently conducting the world’s longest dissertation research on all America? Her study is called “America’s Curiosity of the Exploit of Women as Sexual Beings.” Her thesis is simple: sex sells, especially in America.

You can talk about how you are bored by her antics but then,  she (or her hubby) does something to get you talking about her again. It is our consistent ability to be entertained by such shenanigans that contributes to her rise in fame and wealth.

Yes, I’d rather create reason for chaos than to  deal with a world where people are famous without merrit.  I understand that there is a very good chance that my theory is off base but I’m really rooting for this.

In the small likeliness that I am correct, I’d like to congratulate the future Dr. Kardashian West for accomplishing two amazing feats—her ambitious journey to educate the masses and dealing with Kanye West.  No shade here.

5 thoughts on “The Intellectual Genius of Kim Kardashian”